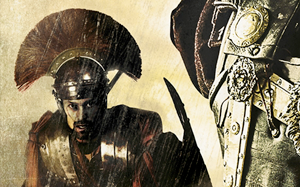 Excited for the new Cato and Macro adventure? Here’s something to whet your appetite even further, as we take an exclusive look at a scene from Brothers in Blood in which a very fired-up Macro is about to lead his men into battle…

The ache in Macro’s limbs began to ease as he felt the blood pump through his veins. His muscles felt tense and tight and there was the familiar lightness in his heart as he anticipated the fight to come. Unlike Cato, he had no doubts that this was the reason why the gods had put him on the earth. This was what he had been made to do. He was a soldier, trained for this end, and by Mithras, he would do honour to his profession. Glancing over his shoulder he saw the line of men following him, breathing hard and grim-faced. Although he had commanded them for less than half a year he knew them well. They fought hard and would not let him down.

They double-timed round the top of the crags as the rain lashed down from the dark clouds scudding overhead. Then the track levelled off for a short distance before dipping down towards the right flank of the enemy line. A flash of sheet lightning lit up the hillside, freezing men locked in combat. Then the light went and an instant later the air reverberated with the roar of thunder. The enemy’s attention was fixed on the men of the Fourteenth, still struggling in vain to find a way over or through the defences. The nearest of them stood where the barricade ran up against a sheer cliff, fifty paces away. Macro stopped his men and waited until the two centuries were formed into a tight column behind him. Then he wiped his hand on the side of his
tunic and drew his sword. He hefted his shield up, raised his sword into the rain and swept it forward.

Brothers in Blood is published on the 9th October!