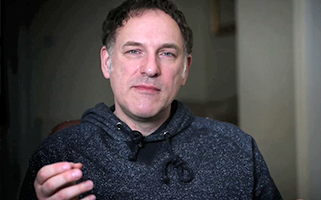 It was a bit of a challenge getting the action sequences written for Hearts of Stone because I’m more used to depicting Roman warfare. The danger is that, whereas with Romans you can find plenty of re-enactors who can tell you a great deal about the kit, when it comes to the Second World War it’s a lot harder to find someone who is a submariner re-enactor, for example, because submarines aren’t exactly easy to come by and take to history events.
So there was a great deal of research to do. For example I went down to Southampton to speak to some of the submarine veterans down there. And it was interesting to hear their experiences because one of the things I hadn’t thought of was just how important sound is, and how terrifying sound is to a submariner. Because the fear isn’t of being shot at, or the physicality of bullets hitting you – it’s the sound of an approaching destroyer, it’s the sound of depth charges exploding. It’s the sound of the water pressure on the hull of the submarine, knowing that at any moment the hull could collapse and you’d be crushed to a pulp. So there are completely different sensitivities and experiences I had to learn about in order to describe them for the novel.

Read more from an exclusive interview with Simon in the FREE Hearts of Stone ebook chapter sampler, available from 21st May 2015.

Hearts of Stone is published on 4th June. Pre-order your copy now, from Amazon or Waterstones