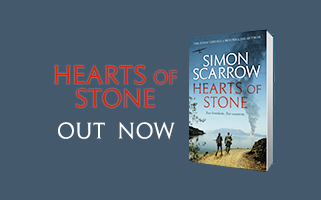 Simon Scarrow’s brand new World War II novel Hearts of Stone is available now in hardback and ebook.
1938: A perfect summer on the Greek island of Lefkas for three young people untroubled by the simmering politics of Europe. Peter, visiting from Germany while his father leads an archaeological dig, has become close friends with locals Andreas and Eleni. As the world slides towards conflict and Peter is forced to leave, they swear to meet again.
1943: Andreas and Eleni have joined the partisan forces resisting the German invasion. Peter has returned – now a dangerously well-informed enemy intelligence officer. A friendship formed in peace will turn into a desperate battle between enemies sworn to sacrifice everything for the countries that they love…
Simon had this to say about his latest work:
“Hearts of Stone is a very different novel to the Roman ones I’m usually associated with because it’s dealing with a different time period. I’m used to writing about great big hairy blokes with swords and all of a sudden I was writing about female as well as malepartisans armed with knives and guns.
What I’m trying to show is that, however sophisticated war may seem to have become, ultimately it’s the same drive as throughout history that people need in order to survive. Yes, in the Second World War there was a greater breadth of weaponry available, but the same human concerns, when it comes to conflict, were at the heart of the fighting as in the Roman books.”

Pick up a copy of Hearts of Stone from your local bookshop, or order online now using these links: