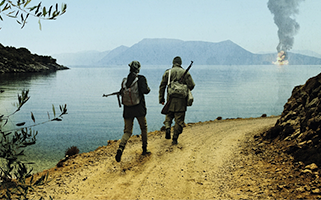 In this exclusive, action-packed extract from Hearts of Stone, we join our hero Andreas and his Greek comrades in the heat of battle…

The violence of the recoil and the numbing blast of the shot shocked Andreas and he instinctively blinked. His eyes opened just in time to see the German in the turret lurch back, throwing his arms in the air before he slumped inside the vehicle. The Hotchkiss burst into life with a deafening rattle close to Andreas, drowning out the fusillade of shots ringing out from amongst the rocks. The other machine gun joined in, spraying bullets into the first of the trucks, striking men down as they began to scramble off the vehicle when the driver braked. Behind, the other lorries stopped abruptly and the men jumped off the rear, under fire from the rocks, and Andreas saw more of them fall.
There was a sudden flash and roar as the first of the grenades hurled by the ambushers exploded and then there were more blasts along the line of the road. Detonation after detonation, drowning out the rattle and crack of small-arms fire and sending clouds of dust swirling into the air. One landed close to the first truck and there was a bright flash and a loud thud as the petrol tank caught fire and exploded in a brilliant fireball of red, orange, gold and black. Two men close by were engulfed in the flames and then staggered off the road, human torches blazing before they fell and writhed. The armoured car swerved to the side of the road and ran on to the banked earth at an angle.
‘Bastards!’ Stakiserou shouted as he hunched low, squinting down the barrel of the Hotchkiss, traversing left and right as he fired. Brass cases leaped from the side of the weapon, tumbling to the ground. At his side Papadakis gritted his teeth against the deafening storm of sounds assaulting his ears and concentrated on feeding the ammunition belt as steadily as he could.
Andreas worked the bolt on his rifle, adjusted his aim and lined it up on the small car. The driver and the two officers had leaped out and were sheltering behind it as they looked for their opponents amongst the rocks above the road. Some of their men were firing back blindly and puffs of shattered stone were bursting off the boulders around the ambushers’ positions. Shutting his left eye, Andreas aimed at the nearest of the officers and fired. The bullet caught him in the shoulder and the German spun round and fell on his back. At once his companions realised that they were caught in a crossfire and hastily pulled the wounded officer off the road and over the lip of the slope beyond. Andreas shot again and missed and then they were out of sight.
The clatter of the machine guns continued uninterrupted as they sprayed bullets along the line of the German convoy. Andreas lowered his rifle and saw that at least fifteen men were down while most of the others had taken cover. A handful had worked their way a short distance up the slope and were exchanging shots with the Greek sailors.
‘Stakiserou!’ Andreas shouted, waving his hand to draw the petty officer’s attention. He carried on shooting, his face contorted into a snarl, until Papadakis punched him in the arm and pointed. The din of the Hotchkiss immediately ceased.
‘Up there! The men on the slope. Keep their heads down! Don’t let ’em get any closer to our lads.’

Stakiserou nodded and shifted his aim, then the Hotchkiss clattered again and Andreas saw clods of soil and shards of stone leap into the air around the Germans attempting to work their way up the slope. One man slumped down and his comrades dropped and pressed themselves to the ground. An instant later a second truck was engulfed in fire as the bullets of the other machine gun struck home, and flame and smoke billowed along the road, obscuring the view from Andreas’s position Stakiserou fired a few more shots and then paused, searching for fresh targets as the men on the slope kept up their attack. One by one the surviving Germans sprinted or crept for the cover of the lower slope, diving over the edge of the road and out of the line of fire.

Read the full, gripping story in Simon’s new novel, Hearts of Stone – out now in hardback and ebook. Order your copy here