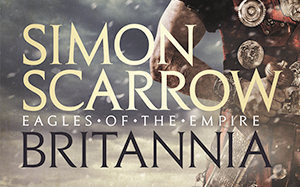 The build-up to Simon’s new Cato and Macro adventure, Britannia, has well and truly begun ahead of publication this November.
Set in Roman Britain, AD 52, it sees the legionaires take on the ruthless western tribes, who are driven by the Druids’ hatred of the Romans .

Wounded during a skirmish, Centurion Macro remains behind in charge of the fort as Centurion Cato leads an invasion deep into the hills. Cato’s mission: to cement Rome’s triumph over the natives by crushing the Druid stronghold. But with winter drawing in, the terrain is barely passable through icy rain and snowstorms.

When Macro’s patrols report that the natives in the vicinity of the garrison are thinning out, a terrible suspicion takes shape in the battle-scarred soldier’s mind. Has the acting Governor, Legate Quintatus, underestimated the enemy, his military judgement undermined by ambition? If there is a sophisticated and deadly plan afoot, it’s Cato and his men who will pay the price…

Britannia is published in hardback and ebook, 19 November 2015. Pre-order your copy: