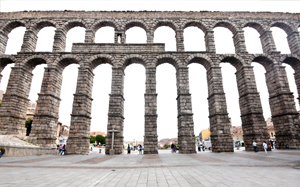 In this interview, Simon discusses one of his previous Cato and Macro adventures: PRAETORIAN…

The starting place for the Roman novels is usually the original histories, letters and so on of ancient writers like Cicero or Tacitus. They give great accounts of the cut and thrust of Roman politics, as well as the various campaigns and wars that the legions fought. Quite often an idea for a story will occur while I am working through one of these texts. Alternatively, I like to travel to the places where I think a novel could be set and scout round for any ruins, museums or settings that could help form the backdrop of a novel. I find it very easy to imagine how things might have been back in the past and make detailed notes of the feel of a place. For Praetorian, I made a visit to Rome and explored the streets with a modern guide book in one hand and an ancient Roman city plan in the other, and tried to superimpose how I imagined Rome might have looked over the modern buildings and streets.

The most interesting discovery I made was the reference in Suetonius to the naval battle Claudius staged to entertain the Roman people. Here was a public entertainment on the most lavish scale featuring thousands of combatants and dozens of ships. In reality, it took place on the Fucine Lake, some distance from Rome. I wanted to depict the fight, but needed it to be set nearer to Rome and so I switched the setting to the Albine Lake, much closer to the capital. Otherwise, I follow the historical event as closely as possible.

What do you find most fascinating about this period in Roman history?

The first century fascinates me because it is the era in which Rome finally succumbed to an imperial regime. The first emperor, Augustus, had taken power following a long and bloody series of factional wars and struggled to establish a hereditary line of emperors to give stability to Rome. His immediate successors, however, were cruel and/or crazy and their poor form endangered the legacy of Augustus. The emperors faced conspiracies organized by die-hard republicans, as well as other plots hatched within the imperial household. At the same time, the emperors were always conscious of the need to curry favour with the mob and this led to ever more excessive forms of public entertainment and foreign campaigns intended to add to the prestige of the incumbent. This is why Cato and Macro are kept so busy and why I won’t be short of plots for a good while yet.

Your Roman novels have had a number of different settings including Britain and Egypt. What has been your favourite location for your novels? Why did you decide to return to the heart of Rome for Praetorian?

One of the most useful characteristics of the age in which my novels are set is the fact that hardly a year goes by without Rome doing great harm to someone, somewhere, around the Mediterranean. This means that my two heroes can find themselves in a variety of settings and it is an opportunity for readers to discover more about the Roman empire, and the wide range of enemies they faced, from the woad-painted Celts in the north to the robed Arab desert tribes of the eastern frontier.

Of all the countries I have been fortunate to visit while researching my novels the most atmospheric was Jordan. There is such a huge variety of scenery, from the lush greenery of the hills in spring to the barren, blood-red sands of Wadi Rum. Both the Greeks and the Romans left their mark on Jordan and the ruins of Jerash, Umm

Qais and Petra are spectacular. But, without doubt, the most striking location I explored was the ruin of the small fort at Q’sar Bashir. It is remarkably well preserved amid a wasteland of stony desert many miles from the nearest town. I was so struck by the solitude, silence and stillness of the place that I knew I had to write about it, and so it became the inspiration for the fort that Macro and Cato have to defend in The Eagle in the Sand.

In this book the lads have returned to Rome since their work in the eastern provinces is over – for now. Having fully expected a well-deserved rest they find themselves immersed in an undercover operation on the orders of the ever-scheming Narcissus. The last time Macro and Cato had been in the capital for any length of time was during the period before they were sent to fight the pirate fleet in The Eagle’s Prophecy. I had a lot of fun reconstructing Rome in that novel and since then I had been keen to get my heroes back to the city, and deep into the heart of the powerplay that surrounds Emperor Claudius. It would be a big challenge for two soldiers who are used to fighting the enemies of Rome on the frontier to have to contend with the plotters striking from the shadows.

This would be a completely new kind of test for Macro and Cato, I realised. Instead of the wide open battlefields they would be fighting in narrow alleys and dank tunnels, and they would be living right amongst their enemies. Also, it would be a chance to provide a worm’s eye view of the imperial family and their coterie at work. Characters such as Nero are too often portrayed in popular fiction and film as fully matured psychopaths and this would be a chance to present one of the most infamous emperors as the more gentle and sensitive teenager he might have been.

Finally, having set up the threat to Rome’s grain supply in both The Gladiator and The Legion, it was time to follow that strand through and see what the effects would have been in the capital. With its vast population (nigh on a million people according to some estimates), Rome was a veritable parasite, sucking in the resources of empire. The flipside of this was that the city was very vulnerable to any threat to the logistical network that kept the city supplied with food. As the saying goes, no matter how grand a civilization is, it is never more than three meals away from a revolution. With the disruption to the grain supply from Egypt, there would have been a severe shortage of affordable grain and much discontent as a result. Perfect conditions for the Liberators to exploit in their bid to topple Emperor Claudius, I thought.