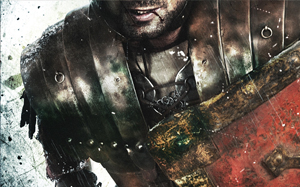 Here are Simon’s notes on the historical details behind THE BLOOD CROWS. Don’t worry, there are no spoilers, but if you really don’t want to find anything out before you read THE BLOOD CROWS then look away now!

History books often refer to the Claudian ‘conquest’ of Britain in AD43 whereas the more accurate word would be ‘invasion’. There’s a world of difference between the two terms. Rome, the ancient world’s longest enduring superpower, had set its eyes on Britain a hundred years before the Claudian campaign when Julius Caesar was brutally busy carving his name into posterity by massacring the Gauls and seizing their lands for the then republic. The invasion of Britain, a land long considered the acme of barbarism and savagery, would cement his reputation in the minds of the Roman public. As it did, despite the fact that neither of his two incursions amounted to more than a brief reconnaissance of the southern part of the island. By picking up where Caesar had left off, Emperor Claudius was attempting to add lustre to a reign that had got off to a very shaky start after the murder of his predecessor and his own elevation only taking place when the Praetorian Guard recognised that returning Rome to a republic would rob them of their rather extensive perks.

In any case, the invasion went ahead and with the defeat of the native army led by Caratacus outside his own capital the Emperor was content to declare the ‘mission accomplished’, with the same temerity, inaccuracy and trimming that was deployed by President Bush in 2003 with regard to Iraq. There was a celebration in Rome and the Emperor, basking in the approval of his subjects, moved on to other matters, leaving the army in Britain to put the seal on the conquest and settle the province so that it could pay its way.

But the conquest of the island was very far from complete and it took a few years to create a frontier from the Wash to the Severn, and then more years to push it farther north and west, at least as far as the mountains of modern Wales. And that is where the Roman advance stalled. The legions and the auxiliaries were confronted with two of the most determined and courageous of tribes, the Ordovices and the Silures, led by a commander who had eventually worked out the appropriate tactics to use against the Roman war machine. Rather than confront his enemy in set-piece battles, Caratacus adopted the time-honoured expedient of ‘guerrilla’ warfare against a more powerful opponent, striking at isolated forts and columns and melting away before the concentrated strength of the legions. In this he was aided by the geography of Wales which at the time was heavily forested as well as possessing a mountainous interior. Perfect terrain for the kind of war he now waged against the Romans.

As is usual in such conflicts, the guerrilla has the initiative, and as long as he can evade situations where the enemy can deploy overwhelming force, the resistance can be continued. By striking at the most vulnerable element of the native forces led by Caratacus, in the manner in which Centurion Quertus carried the war to the Silurian villages, the Romans could retake the initiative and force the natives on to the back foot, as happens with my novel’s depiction of Caratacus being obliged to counter the attacks of the Blood Crows.

Such tactics might work well in a world where there was no mass media on hand to report the ‘collateral’ damage, and it is interesting to ponder the fact that the effectiveness of conventional military power is inversely proportional to the breadth and duration of the mass, and increasingly social, media that reports on its activities. Conversely, the measure of success of the enemy guerrilla forces is directly proportional to the same media. How modern generals must envy the free hand that was dealt to their ancient predecessors!

THE BLOOD CROWS is out now in paperback!