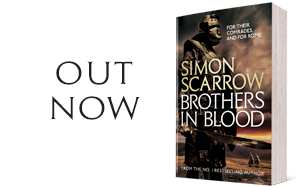 The latest Cato and Macro adventure invades a bookshop near you today! Brothers in Blood is out now in paperback.
AD 52 and the Roman army is on the march in the struggle to conquer Britain. Facing a ruthless enemy, Cato, an army Prefect, and veteran Centurion Macro must also contend with the threat posed by an agent sent by Emperor Claudius’s opponents in Rome.
When Caratacus, the British rebel leader, slips through the army’s fingers, the blame falls on Macro and Cato.  Given the duty of hunting him down, they march far beyond the frontier of the new province. If they fail to capture Caratacus, and expose the secret agent, they will pay for it with their lives…

Brothers in Blood is available now in paperback and ebook. Pick up your copy from a bookshop or supermarket near you, or order a copy online from Amazon or Waterstones