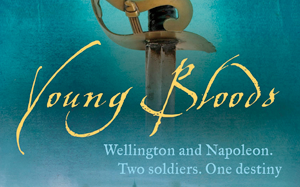 Have you read Simon’s Revolution series? In the four-part series, he brings to life the early years of two very different men who would shape Europe’s future: Wellington and Bonaparte. In this archive author note, Simon introduces volume 1 in the series, Young Bloods…

When writing about historical giants like Napoleon Buona Parte and Arthur Wesley, an author is provided with a stark contrast between the monolithic body of work on the former and the somewhat more limited coverage provided for the latter. As I started work on Young Bloods, I came across a bibliography of books on Napoleon that ran to over 100,000 entries. Wellington-related books rate only a fraction of that number. This is understandable given that Napoleon was, after all, an emperor as well as a general and had a stellar career, thanks to the Revolution and a huge helping of good luck. Take, for example, that incredibly misjudged and foolish attempt to seize the citadel at Ajaccio. He really deserved to be shot for that escapade. But, owing to the declaration of war on Austria, and thanks to the early defeats that panicked the Revolutionary government, France simply could not afford to discard promising officers from the best trained artillery school in the world. So Napoleon was spared, and promoted to captain! For those who want an excellent overview of this extraordinary man’s career, J.M.Thompson is on hand with an excellent biography, Napoleon Bonaparte.

By contrast, Arthur Wesley was born in the most stable of societies. Britain had worked out a political settlement a century before and enjoyed a relatively peaceful and prosperous life, while France, riddled with social division, staggered towards anarchy and the bloodshed of revolution. Arthur, born as a younger (and therefore superfluous) son into the most privileged class of society,was denied the challenges and opportunities that can turn ordinary men so swiftly into extraordinary men. His life was only given meaning by over two decades of war against France that began after the execution of King Louis XVI. Up until then, there was little to distinguish Arthur from any other dissolute young man of the aristocratic set. The frustration and ennui of those directionless years must have tormented him terribly. Worse still, as a younger son he was fated not to inherit the family’s title, nor its wealth. As such, how could he hope to win the hand of Kitty Pakenham in a world where marriage was as much a vehicle for advancement as it was an expression of affection? Arthur was looking at a future devoid of achievement and meaning. I rather think he was saved from oblivion by events in France that were to change his life, and the lives of everyone in Europe. Arthur’s opposition to the French Revolution gave him purpose, and he recognised that at once. And he knew that it would be his life’s work, to the exclusion of all else. That is why he committed that terribly significant act of destruction: the burning of his violin.

The best of the books I can recommend on Arthur Wesley is Elizabeth Longford’s Wellington: The Years of the Sword, a finely written and warm account. For an interesting comparison of the two men, I also recommend Andrew Roberts’ Napoleon and Wellington, for some intriguing insights.

I am sure that many readers will be keen to read more about this fascinating period and about the two men whose careers were forged by the French Revolution. The best overview of the revolutionary period that I have come across, and a book I would heartily recommend for its accessibility and depth, is J.M Thompson’s masterly The French Revolution. It is hard to track the various currents of the tumultuous years at the end of the eighteenth century, and yet Thompson provides a thoroughly comprehensible account of places, events and characters.

Even though Young Bloods is a fictional account of the early lives of Napoleon Bonaparte and Arthur Wesley, I have made every effort to render the period, people and events as accurately as possible. Without writing a truly massive book, however, it is almost impossible to fit every detail of research into the pages of this volume. I have had to made a few omissions and shift the chronology of a handful of events for the sake of the story. In reality, Napoleon made many more visits to Corsica in the years around the Revolution, and I have had to conflate these in my story.

Likewise, for the sake of the story and to add weight to my heroes’ personalities, I have invented certain scenes. The fact that the two youngsters were in France at the same time intrigued me. What would have they made of each other if their paths had crossed? The prospect was too tempting, and too plausible, to resist. Napoleon’s early encounter with Robespierre is also imagined, and given the political fervour of Paris life at that time, equally plausible. Of course, I accept that purists may disagree with my decisions, but historical novelists have a story to tell first and foremost.

With the Revolution now firmly established, France has become a republic. She is surrounded by hostile nations and a great war of ideologies is about to be unleashed upon the peoples of Europe. For Napoleon and Arthur, the first stage of a conflict that will change the world forever has begun.

Find out more about the books in the Revolution series here