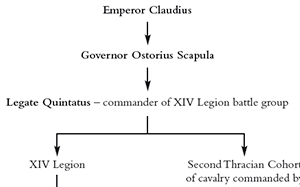 Have you read the latest Cato and Macro adventure, Brothers in Blood, yet? Here, Simon outlines the chain of command for the Roman Army in AD52…

The Fourteenth Legion, like all legions, comprised five and a half thousand men. The basic unit was the century of eighty men commanded by a centurion. The century was divided into eightman sections which shared a room together in barracks and a tent when on campaign. Six centuries made up a cohort, and ten cohorts made up a legion, with the first cohort being double size. Each legion was accompanied by a cavalry contingent of 120 men, divided into four squadrons, who served as scouts and messengers. In descending order, the main ranks were as follows:

The Legate was a man from an aristocratic background. Typically in his mid-thirties, the legate commanded the legion for up to five years and hoped to make something of a name for himself in order to enhance his subsequent political career.

The Camp Prefect would be a grizzled veteran who would previously have been the chief centurion of the legion and was at the summit of a professional soldier’s career. He was armed with vast experience and integrity, and to him would fall the command of the legion should the legate be absent or hors de combat.

Six tribunes served as staff officers. These would be men in their early twenties serving in the army for the first time to gain administrative experience before taking up junior posts in civil administration. The senior tribune was different. He was destined for high political office and eventual command of a legion.

Sixty centurions provided the disciplinary and training backbone of the legion. They were handpicked for their command qualities and a willingness to fight to the death. Accordingly, their casualty rate far exceeded other ranks’. The most senior centurion commanded the first century of the first cohort and was a highly decorated and respected individual.

The four decurions of the legion commanded the cavalry squadrons, although there is some debate whether there was a centurion in overall command of the legion’s mounted contingent.

Each centurion was assisted by an optio who would act as an orderly, with minor command duties. Optios would be waiting for a vacancy in the centurionate.

Below the optios were the legionaries, men who had signed on for twenty-five years. In theory, a man had to be a Roman citizen to qualify for enlistment, but recruits were increasingly drawn from local populations and given Roman citizenship upon joining the legions. Legionaries were well paid and could expect handsome bonuses from the emperor from time to time (when he felt their loyalty needed bolstering!).

Lower in status than the legionaries were the men of the auxiliary cohorts. These were recruited from the provinces and provided the Roman Empire with its cavalry, light infantry, and other specialist skills. Roman citizenship was awarded upon completion of twenty-five years of service. Cavalry units, such as the Second Thracian Cohort, were either approximately five hundred or a thousand men in size, the latter being reserved for highly experienced and capable commanders. There were also mixed cohorts with a proportion of one third mounted to two thirds infantry that were used to police the surrounding territory.