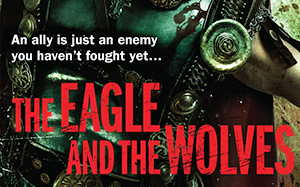 In this note from a classic Cato and Macro adventure, The Eagle and the Wolves, Simon discusses the ongoing conflict between the Romans and Caratacus and his men…

It is, perhaps, ironic that the difficulties facing General Plautius in the second summer of campaigning were forced on him by his success of the previous year. The Britons, and their commander, Caratacus, had taken a beating in a series of bloody set-piece battles that had ended in the fall of Camulodunum – the capital of the most powerful tribe on the island – and the capitulation of a number of tribes. With dwindling resources of men to make good his losses it is likely that Caratacus adopted a different approach in AD 44. The Romans had shown what they could do on the battlefield and Caratacus would have been most reluctant to risk his forces against the massed might of the legions again.

Retreat was the most prudent strategy for the Britons’ commander, and not just because it kept a native army in being. General Plautius and the legions would be drawn after him, intent on destroying the core of native resistance in a final decisive battle. The further they advanced, the more extended their communications became, and the more forces they had to leave in their wake to guard their supply lines. Nor could the legions disperse in order to push forward on a broad front; there were too few of them and they would have been picked off piecemeal. Which makes it all the more surprising to see Vespasian sent off with a small battle group to campaign in the south-west.

Such a division of Roman forces in the face of an enemy that still outnumbered them looks like a very rash command decision. Of course, General Plautius may have had good reason to believe that the risk was slight, but we shall never know. With hindsight historians always comment on the string of successes Vespasian enjoyed, but one wonders what would have happened if the Britons had been able to concentrate sufficient forces against the Second Legion. If Caratacus had managed to give the Second a nasty surprise, and defeat them, then the way would have been open for him to sweep across the rear of the rest of General Plautius’ army, destroying his lines of supply. That would have spelled disaster for the legions and may well have led to another defeat on the scale of the Varian débâcle in the German forests, where three legions had been massacred.

Such a hypothesis once again reminds us of the delicate balance of all military campaigns – a facet of history that is almost always lost in the neat narratives that subsequent historians weave around events. But for the men on the ground – the likes of Macro and Cato – the reality is always confusion, doubt and a bloody struggle for survival. A world far distant from the tidy maps and plans of generals and policy makers. Caratacus is still at large. Defiant and increasingly desperate, he is looking for one last chance to reverse the misfortunes of the Britons. In the coming months Centurions Macro and Cato, and their comrades in the four legions of the Roman army, cannot afford to make one mistake as they seek to end the deadly duel with their increasingly desperate and fanatic enemy.