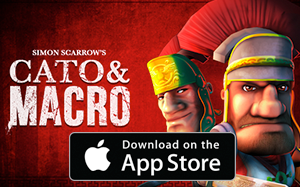 Having taken the Google Play world by storm after launching a few weeks ago, Cato and Macro: The Game is now available for iOS!

Simon himself is delighted with the look and feel of the game: “It was really important to me that the game stay true to the Cato and Macro novels and I’m delighted with how it’s turned out. Expect to see plenty of blood, brutality and Macro-isms!”

More about the game:

• Put your empire-building skills to the test as you build a fort, expand your barracks, collect essential resources to keep your soldiers in battle condition and maintain a Roman settlement to prepare your army for hordes of oncoming barbarian forces.

• Free to download from the iTunes App Store and Google Play, there will also be the option to purchase additional exclusive content such as the Praetorian and the ultimate weapon, The Flaming Pig. It’s literally a pig that’s been set on fire.

• Think tactically and master your battle strategy to conquer your way through the perilous levels. Slash, blast and fire your way to victory leaving decapitated enemies in your wake.

If you’ve got a Windows Phone, a Windows 8 version of ‘Cato and Macro: The Game’ is set to be available for download early in 2015.