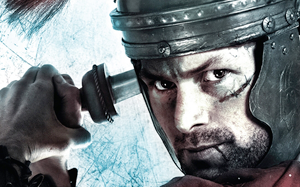 In this note from his 2002 Cato and Macro adventure, When The Eagle Hunts, Simon looks at the history and facts behind the fiction…

One of the most enduring symbols of pre-Roman Britain is the huge complex of earthworks at Maiden Castle in Dorset. It impresses the eye of any visitor and stirs an imaginative empathy towards those who would have had to assault such apparently daunting defences. Yet Maiden Castle, and many other hill forts, were no match for the legions and were stormed and reduced within a short space of time. One wonders why the Durotriges continued to cling to their belief in the defensive properties of hill forts even as they were being systematically destroyed by the Romans. It was not as if they lacked the example of a more effective method of defying the legions. Caratacus was enjoying far more success with his guerrilla tactics. Despite such evidence, the Durotriges remained bottled up in their hill forts when the Second Legion was unleashed upon them. Perhaps blind faith in the promise of ultimate salvation given by their spiritual leaders kept them there.

Compared to the voluminous evidence of Roman history, not much is known about the ancient Britons and their Druids. With almost nothing by way of a written heritage, knowledge of these people has passed down to us through legend, archaeological evidence and the partisan writings of more literary races. What can be surmised is that the Druids were held in great respect and not a little awe. They bestrode the Celtic kingdoms and were frequently approached for advice, and for arbitration between disputing tribes. The Druids were the guardians of the cultural heritage and memorised vast quantities of epic verse, folklore and legal precedents, which were passed down through successive generations of Druids. They formed a kind of social cement between the fractious small kingdoms that, at one time, sprawled right across Europe. Small wonder that the Druids were a prime target for Roman propaganda and were harshly repressed whenever Celtic lands were added to the burgeoning Roman empire.

Yet there may have been a darker side to the Druids, if we can believe some of the ancient sources. If human sacrifice took place, then it did so in the context of a culture that took great pride in collecting and preserving the heads of their enemies; a culture that had devised methods of torture and execution that repulsed even the Romans, whose love of the carnage of the arena is well-documented.

With their geographical spread and cultural peculiarities, the Druids were not a homogenous body, and would have had their factions, much like contemporary religions are riven by competing interpretations of dogma. The Dark Moon Druids are fictional, but they represent the extremist fringe that exists within any religious movement. They stand as a corrective to that naive and nostalgic re-invention of Druid culture that parades around Stonehenge at certain times of the year. And, as I complete this work, they stand as a timely reminder of the extremities to which religious fanaticism can be taken.