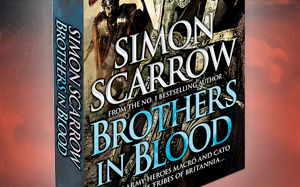 In this extract, we meet Cato and Macro for the first time in their latest adventure, Brothers in Blood. For an extended version of this extract, visit the Waterstones blog…

‘Dear me, I can see that this one’s had a lot of wear and tear,’ the Syrian tutted as he examined Cato’s cuirass, running his fingers across the dents and rust gathering in the grooves between the muscled design. He turned the cuirass round to look at the backplate. ‘That’s in better shape. As you would expect from one of the Emperor’s most fearless officers. The exploits of Prefect Quintus Licinius Cato are legend.’

Cato exchanged a sardonic glance with his companion, Centurion Macro, before he responded. ‘At least amongst the ranks of armour merchants.’

The Syrian bowed his head modestly and set the cuirass down and turned to face Cato with an apologetic expression. ‘Sadly, sir, I think it would cost more to recondition this armour than it is worth. Of course, I would be pleased to give you a fair price if you were to trade it in against a new set of armour.’

‘A fair price, I bet,’ Macro chipped in from the comfort of his chair where he stretched out his legs in front of him and folded his thick arms. ‘Don’t listen to him, Cato. I’m sure I can get one of the lads down the armourer’s forge to knock it into shape for a fraction of the price this scoundrel will charge for a replacement.’

‘Of course you could, noble Centurion,’ the Syrian responded smoothly. ‘But every knock, as you put it, that is added to this cuirass weakens the whole. It makes the armour brittle in places.’ He turned to Cato with a solicitous look. ‘My dear sir, I could not sleep easily knowing that you had gone to war against the savage warriors of these lands wearing armour that might imperil your life and rob Rome of the services of one of its finest officers.’

Macro gave a cynical guffaw from the other side of Cato’s tent. ‘Don’t let the rascal sweet-talk you, there’s nothing wrong with the armour that a little bit of work won’t put right. Might not look the best on parade but it’s good enough to do its job.’

Cato nodded, but as he looked at the cuirass lying on the table, it was obvious it had been better days. He had bought it, together with the rest of his armour and weapons, from the stores of the London garrison when they had returned to Britannia earlier in the year. It had been a cheap, hurried purchase and the quartermaster had explained that there had only been one previous, careful owner, a tribune of the Ninth Legion, who had only worn the armour for ceremonial occasions, favouring a mail vest when on duty. It was only when the lacquer and polish had begun to wear away that the lie had been exposed. As Macro had commented, it was more than likely that the cuirass had seen service back in Julius Caesar’s time.

Cato sucked in a deep breath as he came to a decision. ‘What’s it worth?’

Cato stared down at the sets of armour for a moment and then reached down and picked up a corner of the mail shirt, feeling its weight.

A slight smile flickered across the merchant’s lips and he folded his hands together as if considering the prospect. ‘I think it might be best to consider what you would replace the armour with before we agree on a trade-in price, noble sir.’

He turned to the chest his slaves had carried into the prefect’s tent. With a deft flick of his wrists he undid the catches and raised the lid. Inside there were a number of bundles of thick wool. The merchant turned a few flaps back before he selected two and placed them on the table, beside Cato’s cuirass. Then he folded the cloth back to reveal a mail vest and a gleaming fish-scale vest. Stepping aside so that his customer could see the pieces, he waved his hand over his offerings.

‘Sir, I give you the finest armour you can buy anywhere in the empire, and at the most reasonable prices you will find. On that you have the word of Cyrus of Palmyra.’ He touched his heart.

Macro nodded. ‘That’s set my mind at rest, then. Bound to get yourself a fine bargain here, Cato.’

Continue reading more of this extract over on the Waterstones blog, and you can order a copy online from Waterstones