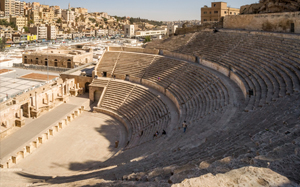 Here Simon discusses the ideas and inspiration behind Cato and Macro’s seventh adventure, THE EAGLE IN THE SAND…

It has been a great pleasure to research and write The Eagle in the Sand. From the beginning of the series I have wanted to take Macro and Cato east. It is long

overdue for poor Centurion Macro, who has been fantasising about the lure of the east. On this occasion the reality has been rather grittier than he had hoped. Maybe next time.

Some readers might feel that I have taken a few liberties with the story of the most famous of the Judaean rabble-rousers executed by Rome – Jehoshua, or Jesus as he has come to be known. To them I would recommend Neil Faulkner’s Apocalypse, a quite superb account of the background and history of the great revolt of AD 66. The various crosscurrents of political, religious and social class divisions are clearly analysed in great detail, and Faulkner is adept at making telling comparisons with the more recent history of the region. I cannot recommend this book highly enough to anyone keen to discover more about Judaea in the first century.

Most of the landscape depicted in this novel remains unchanged and I have tried to convey the starkness and the spectacle of the eastern frontier as tangibly as possible. Bathing in the Dead Sea was as much a novelty for me as it was for Macro, and it is hard to describe the awesome experience of Petra. Even though I had read extensively about the city (and watched Indiana Jones gallop through the siq!) nothing can prepare a visitor for the moment when they emerge from the narrow chasm to be confronted by the towering edifice of the ‘Treasury’. And that was only the start of an unforgettable day’s exploration of the site. Petra’s man-made magnificence is matched by the natural spectacle of Wadi Rum (as it is known these days), a sprawling area of blood-red sand divided up by great walls of rock.The epic scale of the place is made yet more impressive by the silence, and it provides a fitting arena for the final conflict of the novel.

Jordan has some of the most impressive classical ruins in the world. The theatre at Amman is virtually intact, and the remains of some of the other cities of the Decapolis have been extensively excavated. Of particular note are Jerash, and Umm Qais where the visitor can sit high up in a theatre made of black stone and gaze out across Jawlan to Lake Tiberias, and then turn to see Nazareth. And yet the site that impressed me more than anything else was the most desolate and hard to reach, namely the desert fort of Q’sar Bashir. Even the Jordanian Ministry of Tourism was not quite sure where it was. Fortunately King Abdullah put me in touch with a friend of his, Samer Mouasher, who was able to guide us to the site.

The walls and towers of Bashir still rise up from the rock and sand, and the masonry dislodged by an earthquake over two centuries ago still lies where it fell. A visitor can scale some of the towers, and from the top the vista of sand stretches out to the horizon on all sides. I was struck by the hubris of an empire that could build a formidable fort in such an isolated position. ‘Look on my works, ye Mighty, and despair!’ Shelley had nailed the sensation precisely.

As we drove on to Petra, every detail of the fort stayed in my mind, and I knew that I had found the perfect inspiration for the setting of Macro and Cato’s latest adventure.