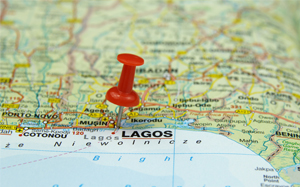 How Simon Scarrow got from Nigeria, where he was born, to Norfolk, has been an interesting voyage. In retrospect at least, he allows, but not while it was happening. “You think, right, well, I’m writing books and one day one might get published, and then one does get published. And then you have to come up with a few more, and think, wouldn’t it be nice if they were successful, and then they start becoming successful,” he says. “The whole thing is very gradual and you never really know it until you stop and look back and think ‘Blimey! What was that?’.”

Having been interested in writing since his schooldays, Simon began work on his first novel after he finished his degree. “I did actually start out by trying to be very, very commercial,” he admits. “I’d be going into bookshops to see what was selling and then thinking, right, I’ll write that kind of thing.” A good plan which didn’t work, leading to three false starts before he realised what he had to do: write the kind of book he wanted to read. And what he wanted to read was something that was set in ancient Rome and was a worm’s eye view of what was going on. “Not a lot of what I wanted seemed to be out there, that was why I gave it a go and really wrote for me and tried not to second-guess the market, and it seemed to work.”

That it did. The Blood Crows is the twelfth book in the Eagle series, and brings Cato and Macro back to Britannia, where the Emperor Claudius’ ‘victory’ over the natives bears a striking resemblance to President George W Bush’s ‘Mission Accomplished’ announcement after the Iraq War: wishful thinking that was not in any way reflected by the reality on the ground.

Throughout the book there appears to be a message which says that it is far more dangerous to disregard history and fail to learn its lessons than to simply be unaware of it. True? “It’s the most dangerous thing we could do, frankly,” he says. “If you look at the whole continuum of humanity and civilisation there are so many ways we are standing on the shoulders of giants, and we owe it to ourselves to understand that chain of cause and effect. If we don’t, like Eugene O’Neill says, there is no future, there is no present there is just the past endlessly repeated. If you get caught in that trap it just leads to tragedy and this is one of the things that gets me, for example, about the current engagement in Afghanistan.”

It isn’t, says Simon, as if we haven’t been there before, and on more than one occasion, none of which ever ended very happily. So why, he asks, do we think it’s going to be any different now? In his opinion it is this aspect of history, the fact that these things have happened before and therefore have a precedent, which we mustn’t forget. “We seem to have a generation of politicians – a continuum of politicians – who never seem to learn from this.”

Like all Simon’s books, The Blood Crows has been intensively researched, but that research serves to inform the storytelling, not weigh it down with a mass of detail. “I wouldn’t go so far as to say I’m an expert and I’ve got it all there – apart from anything, the research is so much fun; basically, I’m a Roman nerd and I will hoover this stuff up until I drop,” he says.

All that research seems to imply that there are a lot of parallels between the soldiers in the new cavalry cohort led by Cato and Macro and the men in a frontline unit of today’s army. “That was always the big problem when I was starting out on this, because I thought to myself: What is a Roman soldier like? We know so little about these guys.” But what he realised was that there were a lot of similarities between then and now. “So I thought, why don’t I apply the sensibility of the British Army, which I do understand, to the archaeological research which I’ve got, and come up with a form of Roman army that feels quite real.”

While he has, pardon the pun, legions of civilian fans, his readership also includes a lot of army types as well. “It’s not just British soldiers who read these book, it’s American soldiers, and the guy who runs the Malaysian Military Academy is a fan, the King of Jordan is a fan,” he says. “So all of these guys who are ex-soldiers really relate to the experiences that Macro and Cato have; it’s a particular way of thinking, the military, and with the Roman army being one of the world’s first professional armies, you can, with some degree of justification, make those comparisons.”

The two soldiers we, as readers, know best are Cato and Macro. Their relationship, which spans years of battle and intrigue across the Empire, is rich and complex, but not one that Simon had planned a course for from the outset of the Eagle series. “I was going to have a young recruit join the legions and the idea was that he would have this tough training officer, Macro, and we would learn about how the legions worked, and that was about as far as it went,” he says. “As the banter between the two of them developed they quickly took on personalities of their own; I had rough sketches of how they might have been, but then they became living, breathing characters, to the extent that they would actually start conversing and I would not be making this stuff up, I would be just like an amanuensis, sitting there taking the conversation down. When that happens it’s a wonderful moment because you don’t know the kind of things they’re going to say.

“As the series has gone on, I began to realise – partly because somebody at a book launch pointed this out to me – that Macro is actually what I have become, Cato is how I started out as a student. It’s a kind of a dialogue of the ages, really…I understand both of them, because you look back on your youth with a mix of nostalgia and horror at the naiveté that you had, and at the same time you look with a certain amount of horror at what you’ve become.”

The other thing that’s been central to the Cato/Macro relationship is the flipping between ranks, the pupil becoming if not the teacher, then the man in charge, which is always a difficult trick to pull off. “Now they’ve got to a stage in their careers where Cato’s potential has got him to a rank that’s superior to Macro, and of course that’s not easy,” says Simon. “I’ve had this in the past myself, when a student I trained took over the department…it was odd, because he was brighter than I was, there was no question about it, he was more able than I was and I was proud of his achievements, but it didn’t make it any easier when he bitch-slapped me. Not that he did it in a nasty way, but it was one of those difficult to deal with moments. And I think Macro and Cato are working through that at present, and bless Macro, he recognises when someone has superior qualities; even if they do talk precious bullshit from time to time.”

Writing believable characters is a skill, especially when those characters are two thousand years removed from us in time, not to mention in how they think. Do you make them like us, but just a little different, or do you paint as accurate a picture of them as you can? “That was one of the compromises I have made in the series,” admits Simon, “because the Romans were absolutely bonkers about superstition, I mean literally bonkers. They were constantly going on about it, and I thought, if I do it to the degree that it preoccupied the Romans, the chances are modern readers would think it was a bit odd, so I’ve tended to downplay it a bit.

“But Mithras really interests me, because, of course, it is the prototype for Christianity,” says Simon, referring to the Roman cult which features in The Blood Crows, “and so it’s an opportunity for some of the characters to act true to form, in a way, to the way things would have been in the Roman army at that time. And I have been conscious of the fact that it’s something I’ve downplayed more than I should have, if I’m honest.”

There are some brutal scenes in The Blood Crows, perfectly normal behaviour in an era that Simon describes as being ‘fairly bloody and fairly brutal’, but which is almost beyond savage to our sensibilities today. Was there any self-censorship involved at all? “Somebody once accused me of writing ‘war porn’,” he says, “and it really hurt, as it’s the last thing I actually wanted to do. Yes, I wanted to write adventure stories set in the ancient world which were realistic, and in which the issues to do with imperialism and the parallels with the modern world were brought up. What I was not trying to do was write stories that just said ‘Ain’t war fun!’ and ‘Let’s see how gory we can get!’. I prefer to leave that to horror writers, frankly.”